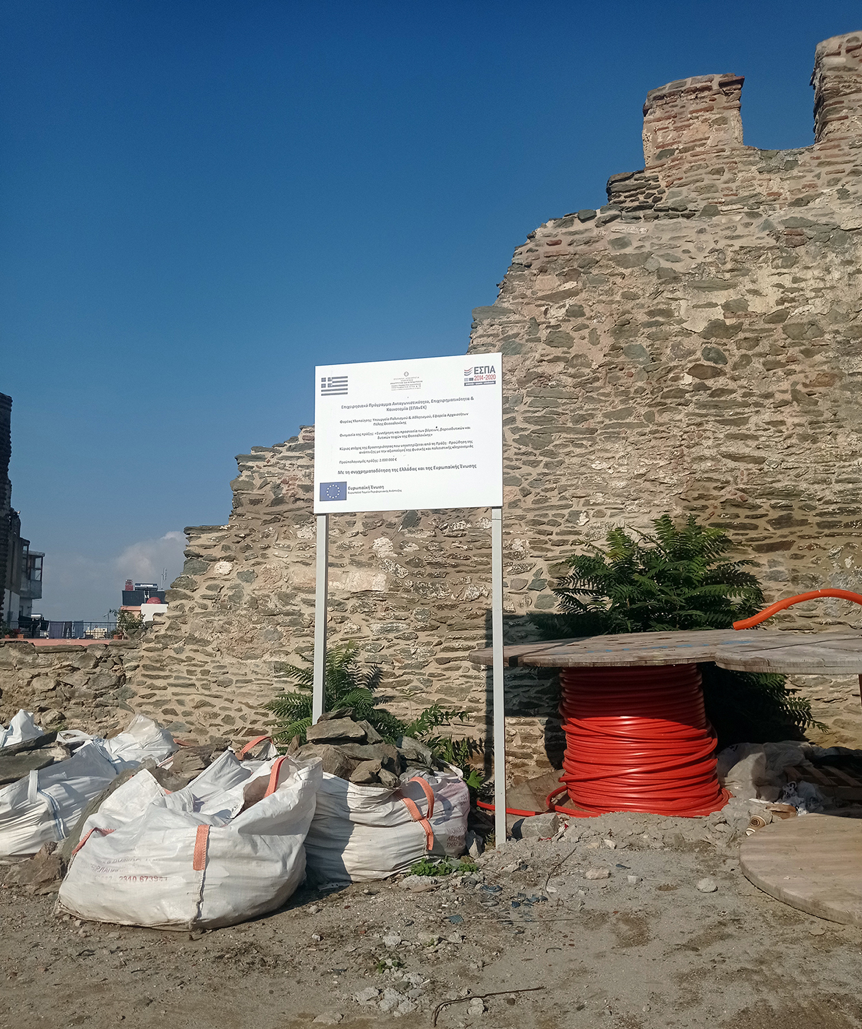 Construction site for the maintenance of the walls and creation of green space, funding EU. Source: the authors. 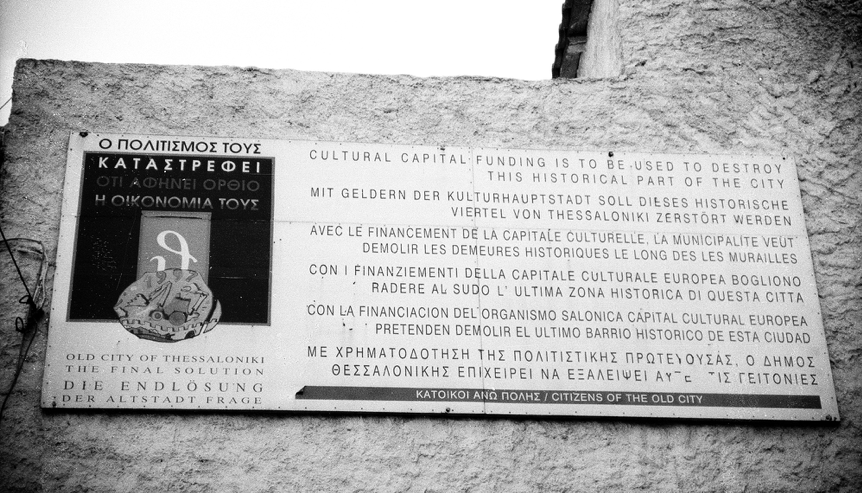 Label against the demolition of wall houses. Source: the authors (1999) 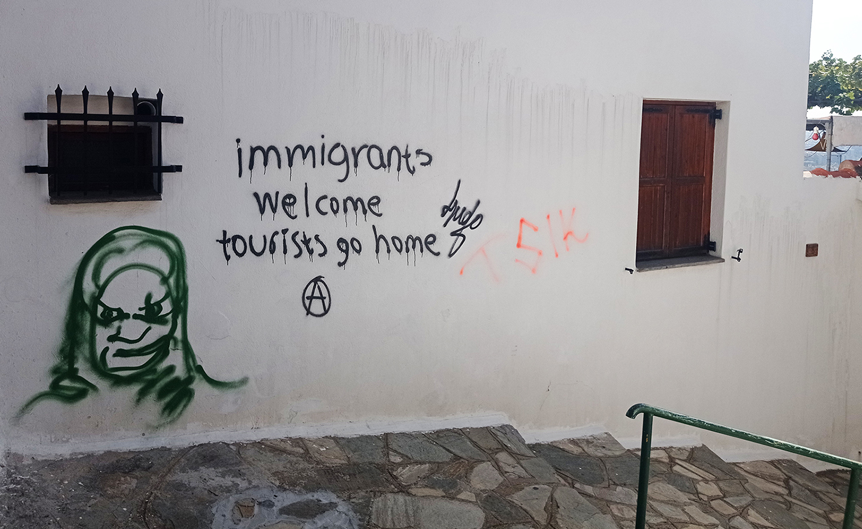 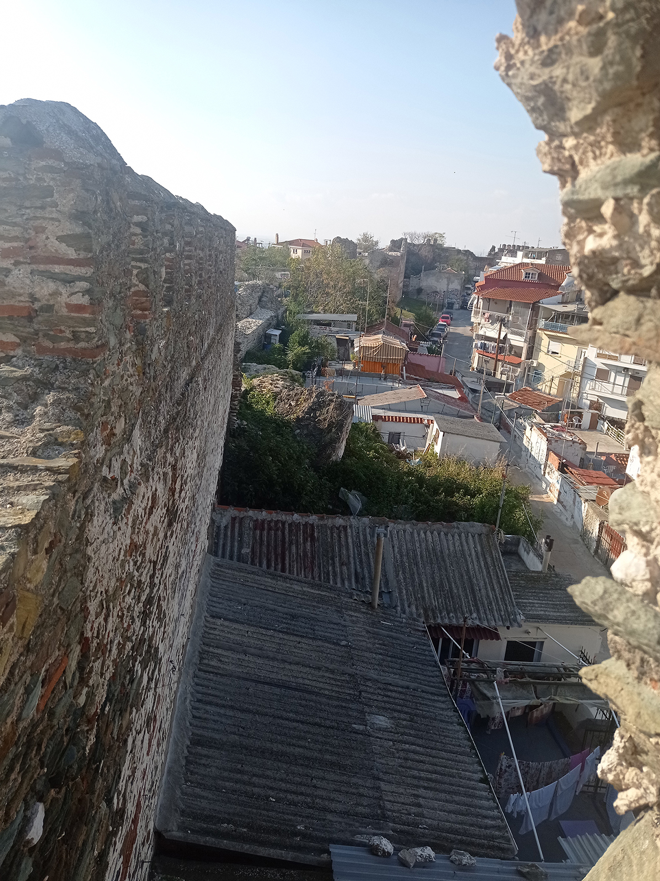 October has just arrived and we have arranged a visit to a housing squat in Thessaloniki’s Ano Poli (upper town). A conversation with the dwellers of the squat will help us build trust and make contacts with more newcomers to the city. Our minds are filled with questions. Which are the material, social and political aspects of Arrival Infrastructures (A.I.)? What is the relationship between A.I., local and global history and the migrants’ everyday life? Our meeting is at 13:00 with a friend from Maghreb. We get in the car and park on Eptapyrgiou Street in a green space – under construction – next to the city walls.

These walls are the fortification which used to divide the palace area (Genti Koule) from the rest of the city. Almost 12 metres high now, the walls were initially built as a defensive infrastructure during the Roman and Byzantium era (4 th century) and various repairs and exapansions happened in the following years of the Ottoman Empire. The area around the walls was mainly inhabited by Muslim citizens until Thessaloniki city was occupied by the Greek army in 1912. After the Greek-Turkish war and more specifically as a result of the Treaty of Lausanne in 1923, 670,000 Greek citizens of Muslim religion moved from Greece to Turkey while 1,6 million Ottoman citizens of Christian religion moved from Asia Minor and Eastern Thrace the other way around to Greece. About 200,000 Christians settled in Thessaloniki and several of them in the so-called ‘interchangeable buildings’, the residences built by Muslims who relocated to Turkey. Therefore, the area of Ano Poli was the place of arrival for the newcomers from Turkey, whose presence in turn attracted more refugees, relatives and friends of them, to settle or build makeshift accommodation – shacks – on the unstructured plots of the area around the walls.

One of the most distinctive characteristics of this new type of dwelling are the so-called “castroplikta” houses – wall houses, i.e small houses that are adjacent to or include parts of the Byzantine walls. However, only a small number of these “castroplikta” still stand today. In 1997, Thessaloniki was named the European Capital of Culture, which motivated a plan to demolish about 900 abandoned and inhabited wall houses in order to create a green zone  1 along the walls. The demolition program envisages the preservation of only 16 buildings, not as residential areas but as cultural and historical monuments of the refugees. We have witnessed local resistance to this demolition plan appearing in the public spaces of Ano Poli since our first visits in the fall of 1999. On one of our first visits to Ano Poli, this resistance took the form of a sign posted on a centrally located building next to the central Portara (a large door in the Byzantine walls) This sign used the same aesthetics, font and logo of the European Capital of Culture in order to attract the eyes of tourists. However, on second glance it turned the logo from a boat to a bulldozer and the message written in 6 languages stated “CULTURAL CAPITAL FUNDING IS TO BE USED TO DESTROY THIS HISTORICAL PART OF THE CITY”. Today, unfortunately, the sign is gone. While the demolition was considerably delayed, it eventually started to be implemented after 2010.

Having parked the car in this particular area of the demolished “castroplikta” houses, we head down to Osios David old church, where we arranged to meet our friend from Maghreb. During our way through the tiny cobblestone paths of Ano Poli, we see a slogan written on a wall: “immigrants welcome, tourists go home”. While we are looking at the slogan, some actual tourists pass by.

The slogan indicates the ongoing controversy over the right to Ano Poli. Similar slogans appear in the streets of the neighbourhood and call for an awareness about two interrelated issues: the increasing touristification and Airbnb-fication of the neighborhood on the one hand and the question of migrants’ and refugees’ housing on the other. There are dozens of similar slogans all over the neighborhood (in English and sometimes in Arabic) and, according to our discussion with local residents, the writers are often local residents – anarchists, leftists and migrants. Since 2016, after the closure of the Balkan Corridor, Ano Poli area has hosted several migrant newcomers, either as guests in solidarity residences, in apartments provided under UNHCR housing programs, or by occupying abandoned buildings such as the “castroplikta houses”. At the same time quite intense gentrification processes are taking place in the area. Searching the airdna database of Airbnb platform we found 1 about 250 available apartments and rooms in Ano Poli. Small hostels have also begun to appear.

1 According to our observations, in the area of Ano Poli there are several squats, housing projects and social centers. Our perception is that the slogans’ campaign (immigrants welcome/tourists go home) enriches and extends the discussion of similar campaigns across Europe beyond anti-airbnb sentiments and the touristification of cities or of specific neighborhoods. Indeed, the campaign in Ano Poli is not just a complaint against touristification but it proposes that the neighbourhood could be a welcoming place for – refugees and migrants – whose predecessors did built the area decades ago.

We meet our friend and he leads us to his housing squat. We realize that his house is one of the remaining “castroplikta” (wall houses) that is adjacent to the walls towards the side of Genti Koule.

There are two beds in the house and no electricity. Church candles are used for lighting, gas stoves for heating, and the interior is decorated with many teddy bears. Our friend welcomes us with a smile and a hug. We climb a makeshift staircase up to a small terrace where a sheet offers shading and a freshly-washed carpet has just been spread to dry. Our friend pours us vanilla-flavored tea with caramel and our conversation begins.

During our conversation we reflect upon the function of walls and how they typically signify a defence infrastructure in Europe, the US and other countries to prevent the entry of immigrants. We talk about fortress-Europe raising fences. Here, however, these old walls may allow us to think differently. Here, these walls reverse the above function and importance. Indeed, thinking with Stavros Stavrides’ ideas about common space as threshold space, these walls have become in some way threshold infrastructure: a shelter but also an entrance to the city for those who do not have papers.

As we continue our research in Ano Poli, together with residents, we will further explore this notion of threshold infrastructure and how it connects practices and narratives on urban commoning with the arrival infrastructures framework. 1 Airdna “tracks the performance data of 10M Airbnb & Vrbo vacation rentals. It offers short-term rental data analysis on Airbnb occupancy rates, pricing and investment research, and more” (airdna.co)